Living in UAEDubaiTravel to UAE

How to Sponsor Dubai Residence Visa for Your Family

Newcomers to Dubai: 13 Things to Remember Before Arrival

Understanding Living Together in Dubai

How to Apply for Police Clearance / Good Conduct Certificate

Almost every week, several passengers from different countries arriving at Dubai airport are being denied entry and never allowed to come back to the United Arab Emirates again.

Such a steep price is expected for those caught with materials connected with sorcery and black magic.

Hassan Ibrahim, Senior Inspections Officer with Dubai Customs, said, “It’s completely illegal in the UAE, it’s against our religion, and those who practice black magic are a danger to society and a threat to the safety of our country,” in an interview with Emirates247.

He said his vigilant and experienced team of inspectors encounter at least two or three cases a week, where inbound passengers are caught possessing items commonly linked to witchcraft.

“We’re concerned with the contents of passengers’ bags, and most importantly, the destination they’ve arrived from.

“We keep an eye out for a range of items, and it usually starts with a high density of papers, as most sorcerers work a lot using unusual symbols written on papers, sometimes combined with Quran verses, written in saffron, ink or blood,” Mr Ibrahim said.

It starts with papers, including magic teaching books, but then the list goes more in-depth.

While in most cases, one or a few of the mentioned items are found in possession of a passenger, there are also occasions all of them are in a piece of luggage. 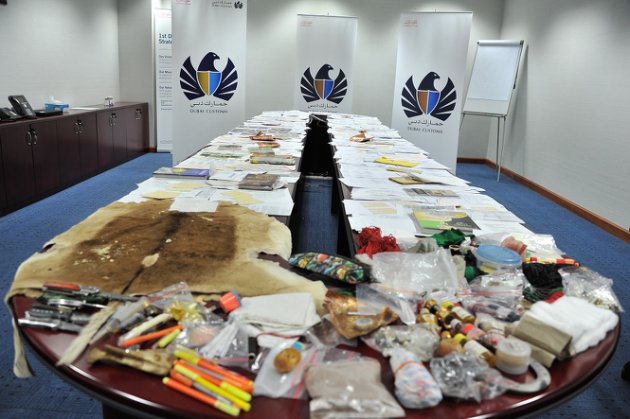 He suspects that many of these visitors bringing these items practice witchcraft that is meant to scam, steal, or fool other people.

However, the majority of these sorcerers are real, based on evidence.

“Along with the symbols, animal parts, and such items, we’ve also caught sorcerers with photographs of people, mainly couples, including their names, and their mother’s name, samples of their personal belongings such as hair and used tissues,” said Mr. Ibrahim.

“These are real magicians working on higher levels of witchcraft.

“But these things do not scare us, we at Dubai Customs are doing our job, and we will still do what we have to do, to protect our country and discourage such kinds of harmful and unlawful activities.”