SSS Death Benefits: How Much Can Beneficiaries Get and How to Apply

Baldwin Baldos is an OFW who arrived in Riyadh, Saudi Arabia on May 15, 2007. Just like many of their compatriots working in this country, he came over with hopes of improving financial stability for his family back home. Baldwin had previous experience in Taiwan in the earlier part of the decade. As his mother has been working in the kingdom for several years, it wasn’t a tough decision to make, although it doesn’t mean they can see each other frequently.

Just like any other Filipino in Saudi Arabia, Davao-bred Baldwin has to deal with timezone differences when communicating with family, extreme weather and strict laws that prohibit public interaction with the opposite sex, a ban on liquor, and stiff penalty for practicing religion. But somehow, he has to take the bitter pill of going abroad like other 1 million engineers, laborers, domestic helpers, and nurses now stationed in Saudi Arabia.

Baldwin recounts he was happy to deal with an employment agency and didn’t have to go through the heavy red tape of Philippine bureaucracy. “I was lucky I had to deal with them [directly] and not with the government offices that [make things difficult for the so-called modern-day heroes]”, he lamented.

Challenges
It was summer season when he arrived in Riyadh to start his airport maintenance job. He describes the feeling as like a hair blower on high settings blowing into his face. “Not all people can speak English so I had difficulties communicating with locals”, referring to the adjustments he had to make at the workplace. At times Baldwin also experiences some degree of discrimination.

But despite these challenges, living in Saudi Arabia isn’t all struggle for many Filipinos including Mr. Baldos. While Philippine workers are occasionally in the firing line for mass layoffs and get used to six-month contracts that offer no medical or accident insurance, he enjoys perks such as tax-free wages, housing, and food allowance as well as job security, a commodity becoming a privilege more than a right to many Filipinos back home. Filipinos are also motivated because of great admiration coming from locals who appreciate the dedication to work.

Days off can be dull, but to Baldwin, it’s a time he looks forward to as he gets time to chat with his family, even though only for a short while.

“My family [is] always online, I could see them even they are asleep.”

He also squeezes time to watch movies, surf the web and watch Filipino programs like 24 Oras and TV Patrol at home. Being thankful for the blessings despite adversities, Baldwin allots time for praise and worship on his rest day.

Baldwin particularly craves pork dishes that are prohibited from the table of every Saudi household. As typical Filipino celebrations like fiesta and Christmas are hardly felt in this Middle Eastern country, among the things Baldwin misses are these Yuletide celebrations, town fiestas, and spending quality time with the family.

One unforgettable experience he recalls is the first time he crossed the runway, where he never thought watching the vast pavement was just from the aircraft he boarded. He wants to ensure the security facilities in the airport are in tip-top shape. He has to make sure that the airport has the working equipment for public security and uninterrupted operation. But Baldwin also stressed that his everyday experiences are equally memorable, especially during his trips throughout the Kingdom.

Homecoming
From the start of his contract, Baldwin has always looked forward to coming home and be reunited with his family. He plans to move his wife and children from Tarlac to Davao where they now own a house. It may be a while before his contract ends but as each day passes, the excitement grows. 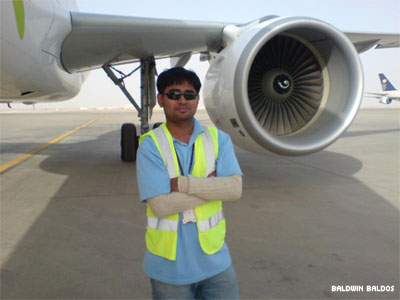 After just two years, Baldwin became a trustworthy staff and was even entrusted to recruit more Filipino colleagues. Such privilege allowed him to choose reliable partners such as high school and college buddies as well as his younger brother.

Tips to Kababayans
“The most important thing to remember always [is to] stay focused on the main reason why they have to leave the country. Many OFWs have been here for more than 10 years but when you ask them what they have back home. The common answer is, not much. We work abroad because our employers need us and we can still work for them. There comes a time it will end for whatever reason, [but] the most important is that we are always prepared and ready to reintegrate into our families”.