Dubbed as “bachelor eviction drive”, authorities in Dubai have been cracking down against single, low-income workers residing in areas devoted for families. The Dubai Municipality implemented such measure as it believes overcrowding in apartments strain the infrastructure such as sewage, electrical systems, parking and many others.

According to Dubai Municipality’s rules, bachelors are not allowed to live in residential areas. The campaign includes spot checks on homes suspected to contain bachelors — and they, rather than landlords, are responsible for paying any resulting fines for overcrowding. Violators face fines of AED 10 per square foot of property, set at minimum of AED 1,000 and ceiling of AED 50,000.

The campaign got more intense in August as the municipality deployed more inspectors who tour residential areas during evening hours — when more people return home from work.

Living in shared dwellings has been the preferred choice for lower-paid workers in Dubai as they charge lower fees while offering minimal amenities such as shared bathroom, washing machine and kitchen with a few dozen other occupants.

Marites, a Filipina teaching assistant in her fifties, has no choice but share home space. She pays Dh800 monthly rent — utilities included — for a space on a bunk bed. To avoid the daily clamber up and down the bunk’s cold metal frame, she pays Dh50 extra for the lower berth.

“My salary is not too high. I have to send money to my family also,” says Marites who does not receive free housing from the school like full-time teachers enjoy. 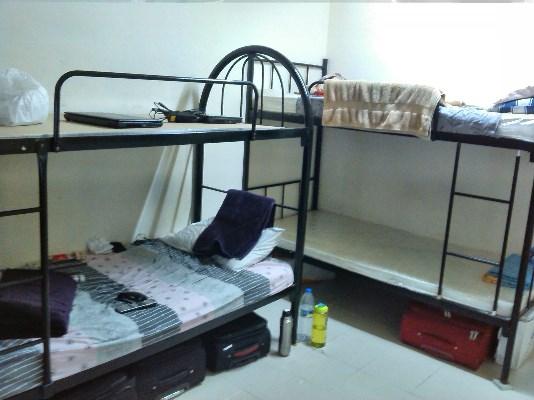 Living in a crowded apartment can lead to arguments.

“Every individual has their own way of life. Sometimes there’s a conflict, but we can handle it,” Marites says. “You have no choice.”

Marites is just one of hundreds of thousands of Dubai’s residents who finds herself in a housing predicament because she does not earn enough to be able to afford her independent accommodation.

Walls and lampposts in lower-end rent areas in Dubai, mainly Deira, Bur Dubai and Satwa advertise availability of bed spaces and rooms, offering a wide range of rates for bedspaces. One listing online, which only allows Filipinas, includes high speed internet, cupboard space, and two communal bathrooms, in addition to sleeping space, all for just AED 500 a month.

Some shave down costs even more, by opting to share single beds.

With their small size and harder access, many hopeful tenants prefer standalone, non-bunk beds. For AED 650, a one bedroom apartment in International City includes all utilities and communal use of kitchen crockery and fridge.

As many people who live in bedspaces have little spare cash for cars, location is key. Most advertisements promise handy access to bus or metro stations.

But while living in a shared apartment is a reality for hundreds of thousands of people in Dubai and other emirates, the practice is often illegal. Under the rules, each person must get at least 200 square feet from the total property area — an area that covers around eight pool tables. Of the freehold areas, many bed-space dwellers opt for Discovery Gardens and International City.

Facing expensive living costs in Dubai, many singles and families have moved outward to Sharjah or even Ajman, where rents can go down as much as half of those in Dubai. But a trip between the emirates that takes just minutes during off-peak times can take hours stuck in bumper-to-bumper traffic.

Some bedspace dwellers can afford far more comfortable options — but concede that they’ve come to Dubai to send money back home; comfort and privacy aren’t in their priorities.

Diane, who has worked in Dubai for eight years, started out as a receptionist in a marketing company with AED 3,500 monthly salary. Today, she makes over AED 10,000 a month in a promoted position, but refused to change her lifestyle.

“We did not come here to have a luxurious life,” says the Filipina.

“When our family back home is suffering, no food, no place, no house, no shelter…[What’s important is to earn] as much as we can earn.”

“That’s why we prefer a bedspace.”

13 Pros and Cons About Living in Dubai