The thought of working overseas is a sign that one is opening up to new horizons by leaving his or her comfort zone and welcoming new challenges in life.

But that’s just the first of many steps that must be followed; there are no short cuts. Along the way, there are plenty of stumbling blocks that present themselves before an aspiring overseas Filipino worker. The lack of employment qualification, financial burden, emotional attachment to family, and risk of falling into the trap of human trafficking, illegal recruitment, and other forms of crime that prey on unsuspecting applicants are some of the most common predicaments OFWs face.

But once an OFW overcomes these obstacles, life as a migrant worker itself teaches some lessons in life.

Being an overseas Filipino worker teaches us to:

A young OFW may be used to be well-pampered by his or her mom, who does the laundry, prepares meals, provides care during sickness, and other privileges young people experience back home in the Philippines. But as a worker abroad — even if he lands a job as a top executive — the OFW becomes more independent and learns skills he or she would have never learned had he or she chose to be close to home. He or she learns to cook, maintain order and sanity at home or be more aware of fiscal discipline. 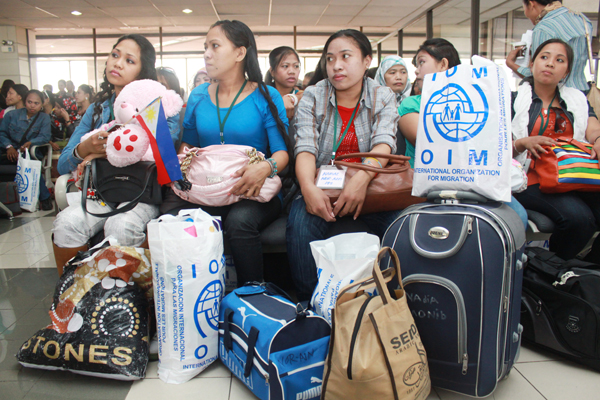 OFWs are expected to send home money remittances, balikbayan box goods, or even buy tickets for the family to travel abroad also if to some of them (especially single ones) such actions are, in essence, not an obligation. Maybe influence by those around them, Filipinos abroad tend to give more to others than self; those who try to treat themselves sometimes face derision. It’s not unusual to hear someone send her entire salary to finance a house renovation or business venture. Helping others is a grand gesture, but if it’s at the expense of one’s basic needs, it’s difficult and unfair. Peppered with seminars such as PDOS, PAOS, and lessons in life heard from other OFWs, they become more aware of caring for themselves, such as funding their retirement and learning that treating self to luxury once in a while is not a mortal sin.

Be conscious of others.

Filipinos abroad not only deal with other OFWs who come from different regions in the Philippines. They also interact with people of other races, cultural orientation, and beliefs. Such experience hopefully helps us understand people with various backgrounds. Some friends stick with you through thick and thin; there are fair-weather friends. Some consciously go out of their way to make themselves useful to others, and there are those “parasites” who live off of other people’s time, money, and effort. With our exposure to such diverse types of personalities, we become more aware of how to position ourselves on various occasions.

As a result of the previous item, a person who is exposed to an environment that blends multiple cultures, personalities, and beliefs is primed for more mature thinking. Rather than read through gossip, we learn by experience how to adapt to different attitudes, be more compassionate, but now armed with calculated moves. For instance, a friend we wish to help and seeks to borrow money may be granted a compromise: the amount you give is less than half of what he or she asks, but there’s no need to pay it back. Such acquired skills could also help read people’s behavior and easily detect scammers and two-faced people, so it’s easier to avoid them.

Learning does not end during graduation in college. Acquiring new skills as a means to equip one to be more competitive in the labor market or prepare for a business opportunity will define how an OFW’s life will be in a few years. In the Philippines, many workers whose jobs have security of tenure tend to stay in the comfort zone and choose not to exert more effort for more rewarding careers. They claim to be happy and contented in their jobs, so there’s no need for further studies (which is viewed as an expense rather than an opportunity to learn more), acquire new skills (it disrupts the weekend movie and get-together schedules). But life is different abroad, and so the quest to discover is out of necessity and not out of habit.

Think for the long-term.

Knowing that living abroad has limits — expired contract not renewed, retirement, disability, death — OFWs have come to think beyond what life abroad has to offer. Blessed with financial rewards of sacrifice working in a foreign land and the mentality that ‘we cannot be OFWs and receive this salary forever.’ Filipinos abroad are likely more inclined to enter into the property, insurance, and stock investment, finance their own business and save for retirement.

Living abroad can be both a blessing (financial rewards) and a curse (disunity in the family) as we hear from personal OFW testimonies or read in the news. But given these two sides of the coin, whatever we experience abroad should serve as a lesson in life. We may stumble in our plans along the way, but we get up stronger and more determined to succeed.