As seafarers, a rewarding career awaits those who are hardworking, forward-thinking individuals. Many sailors have risen from the ranks of able seamen to chief officers.

But there are also more of those who have a financially generous work package but fail to save money. No wonder, some end up striving to get back on board for their next assignment rather than plan their retirement because they either don’t have enough means to enjoy retirement or fail to find fulfillment in their job.

Why Seafarers Fail to Save

Lack of fiscal discipline and overdependent families are often cited as reasons, but let’s examine them in detail why some highly-paid seafarers fail to save.

Many of them are extravagant

The moment the ship docks at the port, they look for things to buy: jewelry, gadgets, and clothing. These are not bad things to own, especially that after hard days’ work in the vast expanse of the ocean, these things offer more than just a reward. But things can quickly get out of hand. Friends try to outsmart each other; who wears the more expensive, more ‘trendy’ brands win, and penny pinchers get the wrong labels. This is sad, considering that the bigger pay one receives, an even bigger ambition awaits.

“If I get promoted, I will buy an even more expensive piece of electronic gadget or wristwatch or a pair of shoes.” No wonder they can’t seem to set aside money even though they have bigger take-home pay. 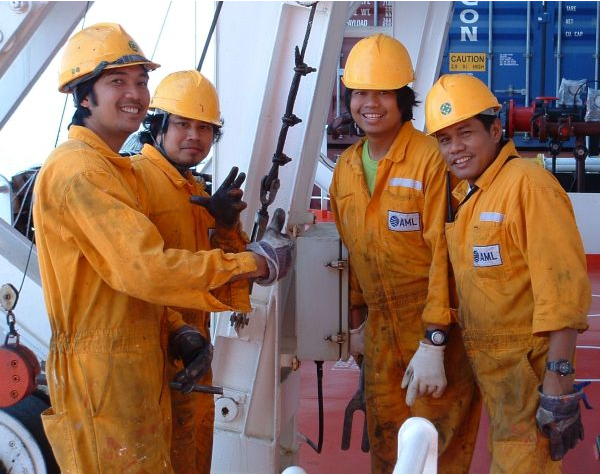 When a merchant gets on board the ship offering a variety of goods, it’s hard to resist the urge to own a piece of something worth bragging about. Others have even extended beyond their means, taking items and pay them at the next salary they receive. Once they have paid for the item, they take another one on credit. The vicious cycle continues unabated.

They are free spenders

“Don’t worry, friends, it’s my treat!” exclaimed one proud officer to his neighbors upon return from a tour of duty. Bottles of expensive wine should earn them respect, and the latest models of smartphone or basketball sneakers should put them above everyone else in the neighborhood. They treat their family to a well-deserved travel adventure, and only that extended family members are also part of the delegation. Cash doesn’t seem to be a problem until they realize it is.

A distant relative starts to recall the sad tale that eventually ends up in asking to borrow money. Someone claims the officer’s inaanak is going to graduate with honors and deserve a special (read: expensive) gift. Another cash-strapped neighbor confides in him that his father is bedridden and regularly fails his medication. Santa Claus is in town even though Christmas is still months away.

They dress to impress.

Long gone are the days when the classy seafarer goes out in the street in casual, simple clothing. Afraid he’ll be teased that he still wears his old dress or wish to attract attention/praise from others, he ditches his old jeans with original Calvin Klein or Giorgio Armani going to the market. He now is well versed with brands that he can easily distinguish an authentic version from bootlegged.

It pays to look good, but he does not mind, as he maintains such a reputation of ‘going around the world’ and so his fashion sense has also gone international. That is why during shore leaves, he makes it a point to visit the mall, arguing that when he returns to ship, he still has a job and expects to be paid the next month.

They brag a lot about their achievements.

They often tell colleagues they own a big tract of land and will build a multimillion house once they return home. Even if their pay isn’t enough to finance that modern apartment, he insists he can manage, thanks to loans provided by the bank. Of course, the garage at home is incomplete without that brand-new car.

Among the things that are often overlooked is that a bigger house requires high maintenance costs. Electricity, Internet, cable TV bills and other utilities, unleaded gasoline, car insurance, and registration all add up to a hefty monthly utility bill. With a massive loan in the bank waiting to be paid, the bragging seafarer starts to calculate how many years will he have to wait before he pays it off.

What a beautiful life would it be if everything goes as planned. Alas, it’s sometimes not the case. A seafarer may assume that he can return to work in three months. But if he has to process papers, follow up his registration, license, and so on, it could take several weeks before they’re all sorted out. And when it appears everything is set for his return to duty, no ship is available. As a result, he might be too embarrassed to tell his family to cut down on expenses. Weekly movie bonding and dine out at the mall have become a common thing. That’s because he used to encourage them to spend, and he’ll take care of paying them all.

As the weeks roll by, he manages to realize that he saved for daily expenses suitable for three months. He’ll be more embarrassed to loan money to sustain his family’s expenses while he is on an extended vacation.

They need to learn continuously.

While many other professions do not require further studies, seafarers are different. They are bound to take refresher courses following the International Convention on Standards of Training, Certification, and Watchkeeping for Seafarers Code of 2010. There are also several amendments implemented by the Maritime Industry Authority set to launch in 2017.

Without anticipating the costs of training, seminars, and other relevant courses, the seafarer could be in financial trouble.

Their smoking and drinking habits take a toll on health

He indulges in excessive alcohol and chain-smoking lifestyle to ease the stress and homesickness while away from the family. The bad habits have later taken their toll on the body of the aging seafarer. A subsequent medical check-up revealed respiratory or liver problems that require maintenance medicine. If he gets admitted for his next tour of duty, he should consider himself lucky. Others with the same medical condition might be diagnosed as unfit to work and unable to earn as much as they used to.

Life as a seafarer, as mentioned, brings plenty of opportunities. With the right mindset, thinking about the future, and setting aside bad habits, one can become a successful seafarer career.

SIRB Application: How to Apply for Seaman’s Book

8 Things Filipino Seafarers Experience Before, During and After Deployment