Why Many Filipinos Want to Work Abroad

5 Things Filipinos Need to Know About Brunei Before Working There

There are many reasons Filipinos work abroad. Whether it’s their first choice or just forced to do so, there are many underlying reasons behind such OFW phenomenon.

Leaving the country means detachment from family members and being contented with long-distance calls, SMS, or instant messaging conversations as primary means of communication. It also means depriving oneself of guiding children and watching them grow. Missing favorite TV shows, going to family hangouts on weekends, and many other things are sacrificed in exchange for life abroad. Let’s identify the different reasons why a family man, a loving mother, or an only child has to leave home and find work abroad.

The unstable economic situation in the Philippines

There is longstanding lack of confidence in the government’s effort to secure a better future for its citizens may have driven many Filipinos to seek employment overseas. Corruption, gross inefficiency in government functions, relatively high tax rate, and no sound fiscal policy have put a damper on the hopes of an ambitious Filipino, who now thinks the grass is greener elsewhere but at home. 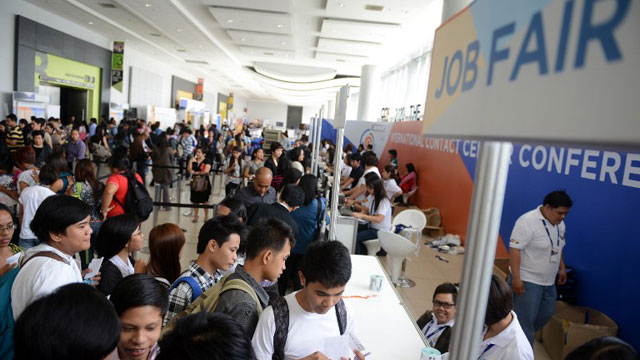 The high unemployment rate in the Philippines

The perennial high unemployment rate has been a chronic problem in a country that produces almost a million college graduates on courses that are deemed popular but whose demand is on the decline. Fresh graduates join the labor force, thereby increasing the competition for jobs available. Worse for elderly job applicants, many companies seek fresh graduates instead of talented qualifications probably because salary and benefits are not good enough for an experienced workforce.

The single biggest reason why Filipinos are willing to go abroad for work is the generally low salary offered by employers in the Philippines. Even jobs that are sought after and in demand in certain parts of the world like nurses, engineers, and teachers are paid poorly. Not to mention the age limit and discrimination based on which school you graduated from. No wonder many would prefer to work abroad as domestic helpers or office clerks and leave their professional jobs in the Philippines because in most cases they’ll get paid higher overseas.

The high unemployment rate in the country brings due advantage to employers who simply hire people on a contractual basis. From mall sales ladies to fast food servers, the practice is widespread in the country. This brings a great deal of job insecurity for those who are employed under such conditions. Filipinos inherently don’t mind receiving a basic salary, as long as there is the security of tenure. However, such a type of work arrangement is hard to find for many sectors, knowing that the supply of workers always outstrips the demand for their services.

Poor benefits for workers in the Philippines

Local employers prefer to contractual employees because it is easier to let go of them and — a labor loophole in the country — no health benefits and accident insurance coverage are necessary. While the coverage of the government’s social services (SSS, Pag-IBIG, and PhilHealth) is generally applied as employment benefits, the monthly contribution can significantly reduce a low-paid worker’s take-home pay. A high unemployment rate ensures a steady flow of applicants, no matter how lame the job offer is. Such an unfair situation keeps employers happy almost all the time.

Believe it or not, OFWs are now covered by better protection, offered advantages (the hotel offers only valid to OFWs, special lanes for overseas workers at the airport, and discounted health insurance premiums to name a few) in addition to being heralded as the nation’s new breed of heroes. Heroes in the coffers of the country, pumping in billions worth of remittance dollars. Even ABS-CBN’s TFC offers front-row seats to balikbayans just to watch Showtime.

It’s not so lonely to go abroad anymore

Before, going overseas is like sentencing oneself into exile to a hostile land. No friends around, will need to deal with unfamiliar language, weather and food. But now times have changed, many overseas Filipino communities have mushroomed all over the world: Tokyo, Barcelona, Sydney, Dubai, Singapore, New York and more. Cultural programs and tours of Filipino entertainers have brought overseas Filipino workers closer to home. Not to mention the cheaper long-distance rates and availability of the web to communicate with loved ones.

Discrimination in job hiring in the Philippines

This is a sad fact that local job applicants have to deal with. Again this has something to do with the glut of available workers willing to get paid lower salaries and not enjoy benefits and paid holidays. Employers tend to pick the “best” candidates but they’re not necessarily the most qualified for the jobs. They are usually those aged between 21 and 30, graduates of schools like the University of the Philippines or Ateneo de Manila, and are at least five feet tall for women, even if the job nature doesn’t require them. It’s the preference of age and pleasing personality over skill and competitiveness. The process leaves qualified but overage applicants in the dark and decides to go abroad.
Updates:

The Philippines has a high-income tax rate for employees. Although lower salary brackets are now exempt from BIR withholding taxes, SSS premium, Pag-IBIG fund and other monthly obligations to the government still create a significant dent in an ordinary worker’s take-home pay.

Salary abroad is often paid once every month.

Getting paid once a month helps workers forecast expenses, and set aside for savings and other long-term plans. We guess it still depends on every worker who wishes to save regardless if salaries are paid every day or once a month.

There are many obvious reasons Filipinos wish to go abroad — we see a lot of fellowmen apply for jobs even with jobs that don’t require much education (see comments for list of willing applicants) — for the purpose of earning more or securing a better future. But in the long-term what does this OFW phenomenon bring to our country and to the next generation of Filipinos? The road ahead may be murky and we don’t know what’s in store, but at the moment, while we are still physically able, we do our best to secure the future. And that can only be through going abroad.