What do you think will Hong Kong look like in Hong Kong had no Filipinos? What if, for some strange reasons, there are no Filipinos in the SAR. This is just a big WHAT IF. And let’s assume the posts vacated by Filipinos will not be taken over by other foreigners.

There will be fewer domestic helpers.

1a. Children will have to be taken care of by a parent or grandparent. This could mean the father/mother will have to give up his/her job.
1b. Wives must learn how to budget HK$200 for a week’s food if this is what they hand over to their household helpers.
1c. Parents must learn how to carry babies for extended hours.
1d. Parents must spend more time tutoring their kids English, otherwise spend more money for a private tutor.
1e. Wives or husbands must learn how to cook or end up spending time queueing at a popular restaurant.
1f. Husbands try to explore the web if there is an automatic way to clean the toilet bowl.

There will be fewer entertainers.

The fact is that many entertainers who work for hotels and bars such as singers, pianists, and bands are Filipino nationals. This is a testament that we Filipinos are a fun-loving bunch of people. In fact, you can randomly pick anyone you meet and three or four out of five would offer a song if asked to do so. 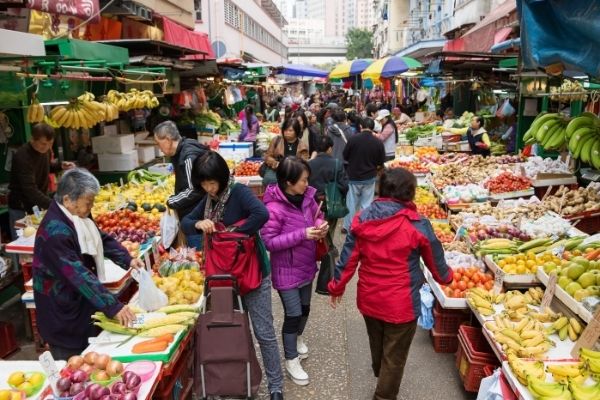 There will be less lively celebrations of Mass.

Go to a different Catholic church every Sunday and attend the English Mass.

This will be a relief for the sanitation crew who are assigned to take the rubbish out of HSBC Headquarters in Central at 8 in the evening. Central will be much quieter too.

Worldwide House in Central will lose many of its current tenants

Ditto for Lidong Building, Yatfat Stationers, Sunny House, Lik Sang, Nan Fung, and other establishments where Filipino products or services are served. There will be virtually no demand for services offered by money remittance centers , door-to-door delivery services, phone card dealers, Pinoy VCD shops, and many more. No one will buy Filipino delicacies that most Filipinos can afford to eat like daing or balut. Giordano and Bossini will have to adjust their marketing strategy to focus on other market segments.

The first and second “alley alley” streets might lose their identity.

Mobile phone companies will lose a substantial amount of clients

They are holders of prepaid and post-paid mobile phone subscription services. We will walk more freely along the paths in front of WorldWide Centre as sales ladies who peddle low-cost SMS to Philippines services will have to rethink their future career moves.

Disneyland could slip into chaos.

With the absence of Filipino performers who comprise a good percentage of the entire Hong Kong Disneyland workforce, the man behind the Mickey Mouse mask may be commissioned to do acrobatic stunts to make up for lost entertainment packages.

Internet cafes in Central are forced to shut down

and donate their PCs to the Caritas or any charity organization that supports computer literacy or posts them at bargain prices in Asiaxpat.

Hong Kong might have problems in the building industry.

Hong Kong employs a significant number of architects, interior designers, and engineers from the Philippines. More than just skyscrapers, Hong Kong also takes pride in its beautiful landscape architecture and interior design. If there are fewer people who will work on these types of projects, the quality of work might be compromised or we might see less of these artistic works of art.

The Philippine Consulate will have to close its operations.

There will be no more overseas Filipino workers to deal with, so the Department of Foreign Affairs would be wise to shut it down, if not radically scale down its operations.

Although jobs occupied by Filipinos can easily be replaced by those of other nationalities, the main point is that as Hong Kong progresses and establishes itself as a financial hub in Asia, behind the people who make this happen are those who work in the backstage. Filipinos are part of them as domestic helpers, architects, engineers, musicians, and other types of jobs that locals may not be willing or unable to do.

How to Go to POLO Hong Kong