8 Most Annoying Habits of Many OFWs

It seems that despite the exposure of overseas Filipino workers (OFWs) to a different culture while working abroad, the old, familiar annoying habits closely associated with Filipinos continue to manifest in many ways. Based on a discussion at OFW Exchange, users described the following bad habits that remain among OFWs.

A simple conversation can easily escalate into a bragging opportunity. If one asks, “saan mo pinapaaral ang anak mo?,” and the other would answer, “ah sa public school lang“, but when asked back, she’ll make a remark “Yung akin sa private, exclusive school, mahal bayad ko dun” insinuating that she earns more, she loves her child more than the other OFW’s, even without the need to do so.

While many Filipinos can understand — especially if what’s being said is true — there are sensitive ones who easily translate this as a sign of arrogance or superiority complex. Instead of bragging (or sounding like one), it’s best to be humble and thankful for the blessing of being able to send a child to a reputable school, live in an exclusive subdivision, or own a fleet of luxury cars. 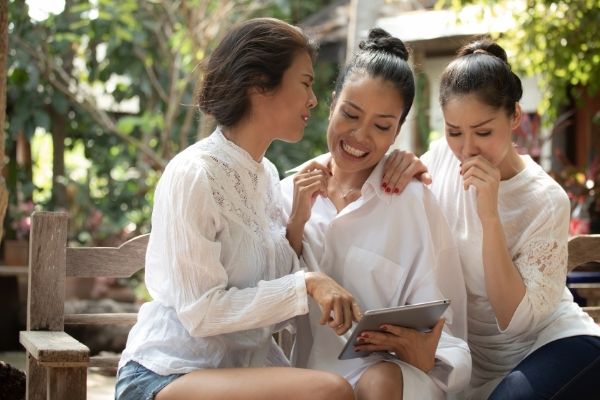 A newcomer in a foreign land often thinks the sight of a kababayan is both a delight and relief. Until one sees how she reacts to your “hello kabayan!”. Nothing. Instead she looks away and ignores a fellow Filipino as though she never heard any greeting at all.A simple smile should be enough, even without uttering a word. Unfortunately, many OFWs don’t think this is a good idea.

Perhaps her attachment to the Philippine entertainment industry as she clutches a copy of a gossip magazine is living proof that her life revolves around consuming and sharing stories about other people who have nothing to do with her.

When an OFW asks a fellow kababayan in Tagalog, the response is a foreign language (with a matching accent) and insists that she does not understand Tagalog even if she just arrived in that country less than five years ago. As if using a foreign tongue would elevate her status as she distances herself from her Filipino roots.

Related: 17 Bad Habits and Attitudes of Many Filipinos

An acquaintance acts more than a private investigator. “Residente ka na ba dito?” “Magkano sweldo mo?”, “Ano trabaho ng asawa mo?” and other queries that are unmindful of one’s privacy. We don’t know how such information if disclosed, benefits them more than it harms us. Inflate your salary and wait for how she reacts. Just be aware she might borrow money from you.

Afraid to be left behind by peers, she updates herself with the latest gadgets, dresses, and designer bags, even if her wage does not justify her expenses. She comes to a point of borrowing money from lenders, loan sharks, or pawnshops just to keep up with her bisyo.

We hope you only observe these attitudes and do not have these habits.