Procedure in Getting Affidavit of Support for Filipinos Coming to UAE

UAE Foreign Workers to Get Job Contracts in Local Language

7% of Jailed Filipinos in UAE Due to Debt

Work Shifts
According to a Labour ministry official, the maximum work shift time in the UAE is set at 48 hours a week. Employers who force their workers to spend more than the allotted limit without payment are violating labour rules and abusing their employees. The said Labour Ministry official was quoted last Sunday.

The law allows 8 hours of work per day for a maximum of six days a week as stipulated in the UAE labour law.

However, the director of Labour Relations at the Ministry in Dubai, Mohammed Mubarak also clears up that the daily hours can be extended to nine hours so long as the extra hour from the work time is deducted on another day in the same week. He also adds that those who work more than this must be paid overtime for the extra hours of rendered service to their employers.

Sharjah-based Arabic Language Daily also quoted the director, ‘Al Khaleej’, Mohammed Mubarak as he adds that workers are entitled a one hour break for every five hours rendered work every day. Employers though are allowed to let their workers work on their weekly day off in return for extra wages.

Holidays
Employees however are not allowed to work for their weekly day off for two consecutive days or holidays. Employers must practice this or they will be violating labour rules and can be reported by abused employees to the authorities in the labour relations office. In response to this, employers have the power to fire their employees if their workers are absent from work for seven consecutive working days.

Article 120 of Labour Law stipulates that annual leave cannot be extended. Workers and employees who extend their annual leave will be considered as absent or missing in action from work. 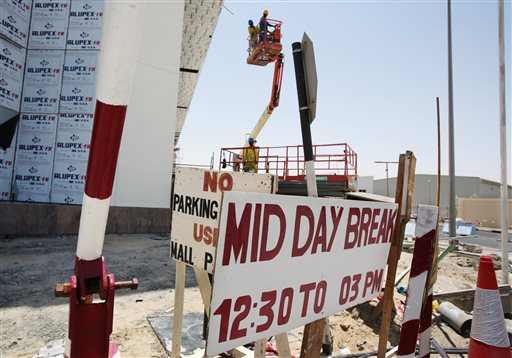 Workers are only allowed up to seven days of consecutive absences. If the employee has been absent from work for more than seven days, his employer has the rightful authority to break the contract and end the service of the labourer without paper process. The exception to this rule is when employees are able to provide proof of unavoidable circumstances that could be his excuse from resuming work at the proper date agreed upon after the annual leave.

Overtime
Employers may increase work hours from eight to, at most of, 10 hours. Labour law states that employers cannot demand more than two hours of overtime from their workers and are entitled to only an additional 1.25 to 1.5 hours depending on the job stipulations and a maximum of two consecutive weekends of work. Labour law also states the employers are required to give one paid rest day after a maximum of six days work.

If ever employers assign workers to work on their day off, employees are entitled to their normal salary plus 50 per cent bonus and a one-day off for the day worked. In case of rule breaching, employees may file a complaint against their employers in the Labour Ministry Office. The Labour Ministry will investigate the case and dole out punishment and penalties as necessary and applicable by law.