OWWA Loans for Business: How and Where to Apply?

Is Working Abroad For You? Check Out These 10 Pros and Cons

Every new year, we Filipinos try to move on and be better than the previous one. Even before the new year kicked in, the new normal has already been taking shape. Yet as the new year rolls on, we continue to aim to leave behind the toxic habits we used to practice and adopt better traits.

Imagine being in the middle of a Filipino family reunion, with a table full of staples such as spaghetti, pancit bihon, fried chicken, and beef mechado surrounding the untouched lechon at the throne. You met your favorite cousin but your toxic Tita is also there, and you try to avoid her gaze. 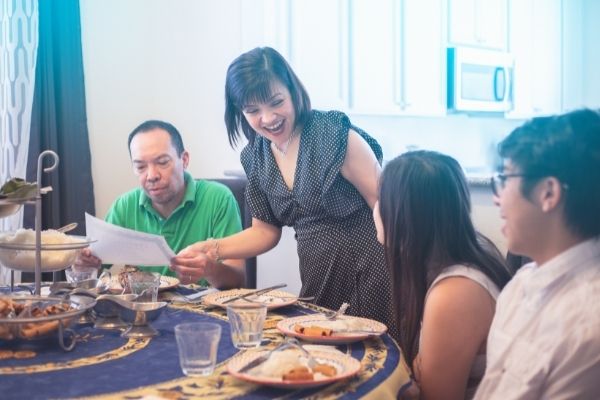 Regardless of what new year we welcome, certain bad manners of Filipinos continue to emerge. These habits are often in full display with the drama and judgment in a typical Filipino gathering, whether it be a house blessing, family reunion, birthday, or Christmas party.

The drama can begin at any time. From forming a beeline to pick food at the long table, to getting inebriated by alcohol that reminds of the old times, these ugly Filipino family habits can unfold at any given time.

Brag about achievements, even if it’s ill-gotten.

Say for instance you are in a Filipino Christmas party, and everyone converges at the table to enjoy the traditional staples of lechon and lumpia. Suddenly, a stranger introduced to you earlier asks what car you are driving or what job you do. Sounds excellent small talk starter. It depends. Once you share a bit about your background, this person starts bragging he’s driving a BMW on a typical workday and Audi RS on weekends with the family.

“Yes, that’s the one parked outside,” he proudly quips.

“May connections ako sa (Bureau of) Customs,” he adds, offering you the chance to own a seized luxury car if you wish to.

Depending on who we ask, he can be a hallmark of success or “saksakan ng hangin.” But one habit we can’t seem to get rid of is being boastful of achievements, even if they are ill-conceived. Sometimes we take pride in paying off a fixer to get a business permit approved in record time, getting their godchildren lucrative posts in the government through their influence and connections, or avoiding arrest for a traffic violation because he knows the chief of police. These topics occasionally show up in party conversations but can have a lasting impression on us.

We can’t seem to mute ourselves from boasting about certain things because we crave attention and praise, just as we ask why our friends did not like our social media posts.

Talk about someone’s weight or appearance.

This is a common gripe among young people about the older generation in a family reunion.

Just because she is your Tita, she doesn’t have the right to body shame anyone. When you call out this rude comment, she suddenly goes on the defensive.

“Ito naman, di mabiro,” she says while sulking about the situation.

While many people take these comments as lighthearted humor aimed at giving life to a party, such statements by few loudmouths can be hugely embarrassing and take a toll on someone’s
self-confidence and personal outlook.

Although ushering in a new year seems like a potent trigger for us to initiate changes, we don’t have to wait for January 1 to get started.

A family matriarch can sound off her frustration in a big family gathering.

“Ewan ko sa mga yan, hindi pa magka-anak, baog yata,” starting a litany of rants on her children who failed to show up with a child in the party.

“Alam mo naman, matanda na ako. Gusto ko lang magka-apo,” justifying the need to have a baby completes the family and make the young couple feel they committed a mortal sin if they fail to fulfill such a wish.

A newly-wed couple may have their own plans: explore travel, look after careers or prioritize other things like building a family home. But such plans may be put aside to be polite and give in to the family pressure.

Pressuring to get married at a certain age. Single people in a room can’t seem to avoid the question about love and relationships.

Putting pressure on children to get married at a certain age.

Idealistic parents sometimes set a certain age for their kids to settle down. When they were small kids, the children often receive advice not to be involved in a relationship.

The kids were obedient, followed their parents, and concentrated on their studies. But when they have finished school and got themselves a job, some parents now start to prod them to get married and bear children of their own. It sounds like a natural progression in life, but others may claim this extends control over children’s destiny, not giving them enough freedom to plan for their future. Although these are merely the wishes of parents, children are inevitably feeling the pressure. Get married and have children.

The son or daughter eventually finds love and settles down, but some parents continue to dictate their children’s lives in the guise of paglalambing. Parents and relatives may offer advice, but they should respect the decision at what age should one get married, if at all.

Dictating how family members should live their lives.

As a follow-up to the previous item, children seem to be bound by a certain pattern defined by how their parents lived their life or use anecdotal evidence to send a subtle message.

“Noong panahon ko, di ako lumuwas ng bayan hanggang nag college ako,” insinuating that children should be home-bound at all times, and adventures are equated with the perils of uncertainty, hazards, and risks of misfortune, and discourage them from exploring the world.

Many children ended up dropping out in school or shifting to other courses because the courses they took in the university were chosen by parents or whoever financed their education.

Times have changed, and this often influences people’s lifestyles and decision-making. So learning from experience is often key to success in moving forward. But there are cases when changing times bring fresh learnings the previous generations have not encountered, and therefore fail to share with their offspring.

Each individual is bound to follow a distinct journey in life, and micromanaging someone else’s to follow yours often leads to frustration, finger-pointing, and regrets in later life.

Gauging success based on someone else’s achievements.

In that same family gathering, the irrepressible Tita brags about the achievements of her child.

“Si Conchita ko, kalilipat lang dun sa isang Fortune 500 company at ginawang associate sa Makati branch nila,” another Tita who is out in force to outwit and outperform the previous announcement with head held up high.

A few in the crowd who were oblivious of the embellishments and false claims can’t help but marvel at such achievements that they also try to set them as a template for their young children’s success.

Ironically, we are engaged with those closest to our hearts in such gatherings of family and friends. But these venues are also where we hear the most degrading and demeaning remarks.

We all are endowed with various skills and strengths that match certain goals in life, so it’s unfair to gauge success based solely on someone else’s life achievements.

The habits of certain Filipino family members have been pervasive over the years and are already considered intrinsic to our culture. But unless someone calls out such types of behavior as demeaning and derogatory, they will be passed on through generations and reused as a discussion starter for future family gatherings.