7 Signs of a Bad Employer of Domestic Helpers

How to Open a Stock Investment Account at COL Financial

Just like many other countries, the Philippines has been struggling to cope up with the impact of coronavirus. Movement of citizens has been restricted, and transport systems have been paralyzed in an effort to arrest the spread of the invisible enemy in which no potent vaccine has been developed yet. This has impacted various industries tremendously — tourism and retail to name a few. This no doubt will cripple the domestic economy.

But more than just halting the local activities to a standstill, the fate of overseas Filipino workers — many of whom are front liners in their host countries — will also bring a significant impact to the local economy. In 2019, OFWs remittances reached a record $33.5 billion, up from $32.2 billion they sent home in 2018. The 2019 figure is equivalent to about 10% of the country’s gross domestic product. If the first half of 2020 is an indicator, it will be difficult if not impossible to reach those numbers.

The Philippine economy declined by 0.2% in the first quarter, its steepest in more than 20 years. Economic experts place the country to a full-year contraction of between 2% to 3.4%. A significant indicator of this is how much Filipinos abroad will be able to send home.

On May 6, the COVID-19 National Task Force announced that 45,000 OFWs are expected to return home by the end of June, bringing the list of repatriates close to 70,000. This is not counting those who remained in their jobs on reduced work hours or pay cuts that resulted in less take-home pay. The number is expected to grow. In a policy brief authored by a Philippine university, about 300,000 to 400,000 Filipinos working abroad will be affected by the pandemic, from pay cuts to layoffs to eventual repatriation. More than 10% of Philippine households depend on overseas remittance.

As of writing, COVID-19 has infected close to 2,000 OFWs, 214 of them died, including the Philippine ambassador to Lebanon.

Working abroad remains a desire for many Filipinos despite the risks of abuse. Even though 37% of OFWs are employed in low-level positions, a significant portion of those working abroad is employed as professionals such as nurses, teachers, and engineers. The better quality of life, notably for developed nations, and higher wages have been the main reasons why young Filipinos opt to go abroad than practice their occupations in the Philippines.

According to the 2019 report of the World Economic Forum, about 53 percent of the country’s young people, aged 15 to 35 years old, wanted to work overseas.

But as airports closed, and deployment halted to both economic headwinds and health precaution, those hopes of joining the growing number of OFWs suddenly turned bleak. That’s because the demand for jobs has suddenly evaporated. In fact, many companies are planning to downsize headcount, if they can remain in operation.

Across the globe, there are more bad news is looming for OFWs. CNBC cited a survey that in Dubai, 70% of companies will shut down in six months of coronavirus restrictions. The dire findings were based on earlier observations that the economy was already slowing down even before COVID. Residential property prices had already fallen 30% from their 2014 peak amid oversupply and weakening demand, and revenue per available hotel room was down more than 25% since 2015, the report said. Now, the coronavirus health crisis has made things even worse for both businesses and the people they employ.

Of the 680,000 Filipinos based in the United Arab Emirates, about 450,000 are based in Dubai. Many of them are employed in engineering and design, oil, retail, healthcare, and information technology sectors.

Saudi Arabia and other oil-producing states have faced a similar fate as the price of petroleum crashed amid a lack of demand. Some of the 900,000 Filipinos working in Saudi Arabia have seen their salaries slashed by up to 40 percent, according to Rodolfo Estimo, a former editor of the country’s Arab News newspaper. 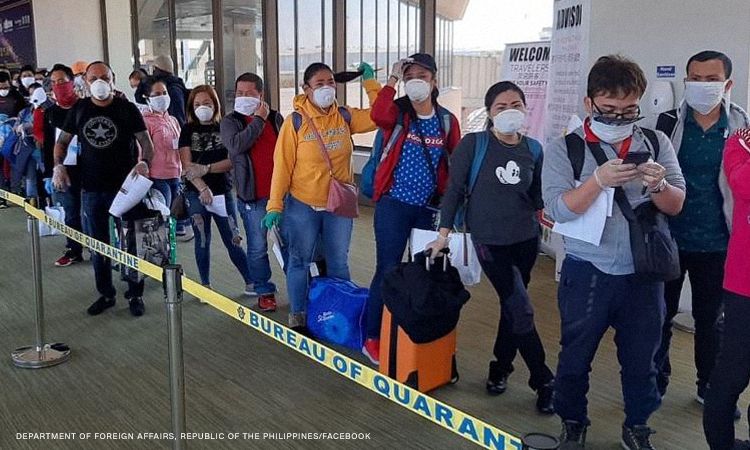 Various sectors have suffered, notably aviation which Saudia, Etihad, and other airlines announce layoffs. Job cuts, however, are felt across a wider range of industries. Companies such as Nissan, IBM, Airbnb, and Uber announcing staff reductions.

A lawmaker initiated the Balik Probinsya Bagong Pag-Asa Program to help relocate Filipinos in cities and back to provinces to help spur growth in the countryside, and supported by 23 government agencies. Integrating returning OFWs back to their provinces could be patterned from this program where their expertise can be utilized to help develop regional development.

It may not be as appealing as returning to their high paying jobs abroad, but reintegrating OFWs back to the Philippine job market is the next best thing to do and mitigate the loss of remittance cashflow. Indirectly reversing the brain drain that has deprived the Philippines of its bright minds in favor of foreign interests, reintegration of returning OFWs could spur innovation in local industries, develop advanced processes, and nurture industry growth. This is only possible with adequate support and proper coordination among implementing agencies.

Besides receiving aid through the AKAP program of DOLE-OWWA, OFWs and their families have been isolated from the social benefits other citizens have been receiving. While the Labor Department has already disbursed assistance to some 86,000 OFWs, it is still requesting for a higher allocation from the national government after receiving over 230,000 applications.

The Philippines has faced one calamity after another. It has endured annual visits of destructive typhoons. Just a few weeks before the coronavirus was declared a full-blown pandemic, Filipinos have been scrambling for masks not for fear of getting infected with certain diseases, but from the ashfall coming from an erupting volcano near Manila. The virus proved to be a different beast to tame, testing the resiliency of the Filipino spirit.

For many years, the so-called modern heroes have been on hand to offer a boost in the Philippine economy through their remittance dollars. Now, many of them are in distress, seeking help from the wrath of the virus, and the weight of impact in its aftermath. As they endure economic hardship, it’s about time to return the favor.