But Facebook also became an ideal medium to develop bad habits such as wasting time and spreading incorrect information. Filipinos, in particular, have nasty manners when it comes to sharing posts on their Facebook timeline. Maybe you’ve observed them, too. But if not, here are some of the annoying Facebook posts, some of our social media friends may be doing.

Bashing people without naming them

It’s a classic Facebook post probably intended to vent someone’s anger online, to plead for sympathy online, or to nudge an insensitive offender. Someone might be betrayed in a friendship. Someone might have forgotten to fulfill a promise, like paying off borrowed money or maintaining a lasting relationship. Bashing these people online may be the most potent way of sending the message without becoming a target for cybercrime laws.

No issue is too little, too trivial, or too mundane for some Facebook users who appear more willing to post their personal affairs online than worry about the repercussions these posts bring. Angry at a neighbor singing loudly on a neighborhood videoke or a former friend who ran away with your money? Facebook is the ideal platform for some people to vent their emotions, attracting the attention of friends.

If you are doing this, think about all your contacts on Facebook who don’t necessarily need to know. Your maturity and character are in full display for others to observe.

It’s not so widespread these days but there was a time when games were all the rage on Facebook. A friend who wants to play scrabble can easily invite you to click a link so the game can commence. Such requests can build up to heaps of notifications. If you are not into this habit, such invites can also be very annoying.

It appears that prayer offerings in the online world can be expressed in the form of a social media reaction such as like or love. Or so some people think. They believe that instead of meditating in silence, prayer can also be done while spending time on Facebook. And it can be done by merely liking a posted photo of Jesus Christ or a poor child afflicted with a debilitating disease, plus typing the comment “Amen” to seal the deal. 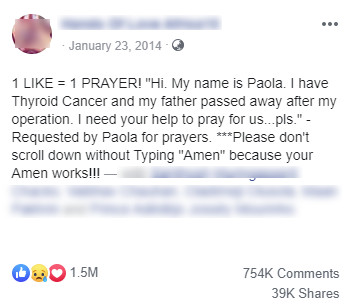 There may be two reasons people do this: the promise of blessings and other forms of “pabuwenas” and the common expression for curious people — “Wala namang mawawala kung susubukan ko lang.”

People like a Page, photo, or video on Facebook because they like what they see and not because they were told to press the Like button, which makes an effort artificial. Facebook does not outlaw the act. It has a tool to allow someone to spam his or her friends in the guise of inviting them to like his or her Page. 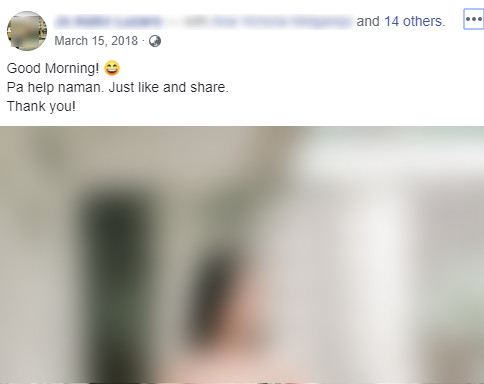 Very similar to the previous item, only that individual posts and not Pages are the supposed recipients of your online affection. Usually, a Facebook friend will tag you and plead for you to like a photo. This photo is often an entry in a contest, on which the photo with the most likes or reactions wins. The posted photo might be a friend’s young child submitted as an entry in the “cutest baby category” or a child’s unique costume in a school activity.

Just the same as above, the idea of asking someone to like a post is like pimping for fame and a sure-fire proof of the narcissistic, me-first nature of social media.

Many Facebook users might not mind liking photos, especially if they know who is in the picture. But others may find this obnoxious and annoying.

Not too long ago, it was possible for Facebook users to post explicit images without filters. As a result, images of mutilated bodies of people involved in a road accident or someone being beheaded by terrorists can be seen in someone’s Facebook timeline enough to turn your stomach. Insensitive users then freely shared images or videos of such kind without respect to the victim nor consideration to their Facebook friends who cringe when they see the explicit details.

Thankfully, Facebook installed a pre-emptive warning on such type of media and only displayed it with a user’s confirmation.

But it has never stopped certain Facebook users from sharing such types of posts. 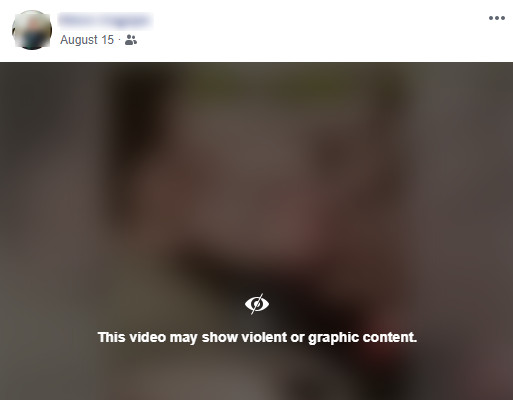 There are many tricks in the bag about chain letters that Filipinos often fall into. From Facebook founder Mark Zuckerberg’s “plan” to share a slice of his wealth to those who share the news to everyone to the dreaded Facebook “apocalypse” that promises a fee charged to Facebook users who don’t share the same update onto their public posts.

For topics close to home, themes around giveaways like OFWs were purportedly receiving a bonus from OWWA if they share the post. Or some good luck — winning in a raffle draw or wish granted — if a message gets shared.

The accessibility of the share button on Facebook timeline and the convenience of forwarding a message through its Messenger app does little to spread such chain messages. In the past, the postman used to deliver the chain letter promising both blessings for obedience and a curse for indifference. Each letter might contain a centavo coin, and the sender needs to buy paper, an envelope, and postage to make it work. Now that it’s all free — thanks to open data by Facebook and the convenience of public wifi — chain letters on social media will spread like wildfire.

Indeed, there are Facebook users who’ll do as fellow users tell them without verifying accuracy and truthfulness. In a way, chain letters are earlier incarnations of fake news before they became a staple of today’s headlines.

As a follow-up to the previous item, the availability of alternative media has indeed blurred the lines between truth and lies. On the one hand, it promises to deliver news that mainstream media is unwilling or unable to cover. On the other hand, it might package the story as true even though it lacks verified sources. Since everyone can build a website and sharing the story on social media is as easy as making a sandwich, what is fake news appears legit, especially since they are being shared by people we know and trust.

Even if Facebook has a report function that allows users to flag fake posts, it is hard to enforce across the entire network. Every user needs to be vigilant and must exercise due diligence to make it happen. But it’s easy to get distracted within the Facebook platform. Suggested friends, random videos at Facebook Watch, Marketplace, and tag notifications, all compete for our attention.

Want to win free Emirates tickets or coupons to get in at Disneyland? You might be one share away from “winning” this prize. As it always turns out, that air ticket bonanza is nothing but a phishing expedition out to capture personal data.

A click to such links may trigger a malicious code to hack into someone’s computer or lead to a form intended to harvest your personal information instead of adding your name into a massive pot of contestants vying to win that business class trip. No wonder airlines need to be more proactive and inform the public of such scams.

They say e-commerce is now taking over brick and mortar businesses. And there’s no better way to promote your counterfeit pairs of shoes or leather bags than on Facebook. And it’s a lucrative business that has made some of your Facebook contacts establish a reseller livelihood.

Another form of peddling products on Facebook is multi-level marketing. They are led by self-proclaimed health gurus or financial advisers known to sometimes brag about their wealth by leaning on a brand-new luxury car or carrying wads of crisp bills. These so-called experts promise both prosperity and wellness for those who follow their lead and hawk their products for a generous referral fee and recruit members into the network and do the same.

Attention seekers on Facebook love to tag friends within their posts. Even if they don’t appear in a photo or mentioned in a text update, friends expect their names to be dragged into the position. Tagging can also be in pictures of cute cats and dogs, memes, quotes, and whatever post they could think of.

This habit is annoying and has to stop. Thankfully it is possible on Facebook to allow or disallow a post tagging you from appearing in your timeline.

Filipino social media users spend on average 9 hours and 29 minutes in 2017 to 10 hours and 2 minutes in 2018, according to a We Are Social and Hootsuite digital report. Those figures represent the highest in the world. It’s no wonder that with so much time spent on this platform, Filipinos do a lot of things meaningful and otherwise on social media. Sadly, the above list is part of them.

Calls, Messages That Bridge OFWs and Families Back Home