OFW Passport Renewal: How OFWs Can Renew Passport in the Philippines

Marriage, Relationships A Distraction to Some OFWs

9 Ways You Can Land a Job in Thailand

It’s almost a given that once a Filipino worker is based abroad, performing transactions in a Philippines-based agency can be a tough thing to do. However, the Philippine government has been trying to make life easier for overseas-based Filipinos. In addition to the Philippine consular presence abroad, SSS members have been granted more convenience with its presence in many Philippine embassies and consulates.

Is it easier/faster to do OFW passport renewal in the Philippines?

Also, overseas Filipino workers who wish to renew their PRC licenses may do so online. Those whose passports are about to expire need not return to the Philippines to renew them as Philippine posts abroad offer these services at consular offices, as well as outreach to places where there is a seizable number of Filipino citizens but lack consular presence.

To make lives even easier for passport holders, the Philippine government has recently extended the validity of Philippine passports from five to ten years.

But that does not mean Filipinos based abroad cannot and would not renew their passports in the Philippines. There are those who happen to be in the midst of their vacation in the country and have ample time to do transactions such as paying their PhilHealth premiums, renew their driver’s licenses and renew their expiring passport.

Due to high number of passport applicants, the Department of Foreign Affairs has set up an appointment system. The good thing for OFWs is that they are not required to set up a passport renewal appointment. Instead they can just visit the nearest or most convenient DFA office (or one of the one-stop shop for OFWs).

OFWs may bring along other eligible family members or friends who do not require passport renewal appointment. They include:

Renewal of the following passports will be treated as NEW APPLICATION.

The following are the general requirements for renewing your Philippine passport: 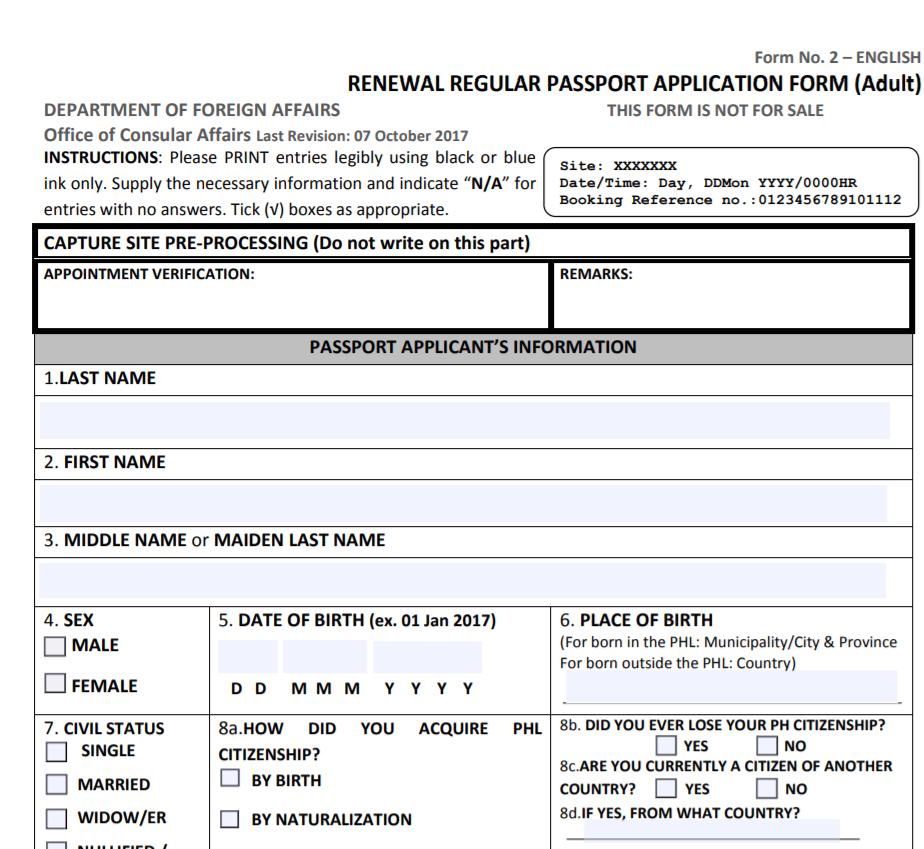 OFWs will need to bring proof of their overseas employment for verification. It doesn’t harm if you bring your employment contract and current passport showing employment visa stamp. To be be assured of availing the courtesy lane and not require online appointment, OFWs are supposed to bring the following:

If you made amendment to your name such as when you made revision to your name (spelling or otherwise) or adopted your spouse’s surname so it does not reflect with the identity in your documents, you may bring the following, depending on which case it is applicable:

If your passport is damaged or rendered beyond recognition, please bring the following:

In case your passport is lost, you need to bring the following:

This case will then be handled as a new passport application

In addition to the above documents, additional requirements may be asked during your Philippine passport renewal (especially for Filipino citizens who have obtained citizenship from another country) such as:

How to Proceed With Your Philippine Passport Renewal

Step 1: Secure the above requirements applicable to you.

Step 2: Head to a conveniently-located DFA office (see list of one-stop service center addresses here). Since you’ll also be required to have your photo taken during this appointment, ensure that you dress properly. While business attire is not required, those wearing sleeveless tops and sandos may not be admitted.

If you secured an online appointment, arrive at the venue 30 minutes before scheduled time.

Step 3: Submit your documents to a service counter once your name is called. Also pay the necessary fees at the cashier.

Step 4: Proceed to a designated desk where your biometric information will be taken. You shall be notified when your new passport will be released.

How Many Days Will I Wait For Release of My New Passport?

Please note that your passport will not be released on the day of your application.