10 Bad Habits of Many OFWs

Managing Money for OFWs Under 30

It is not uncommon for Social Security System members to be curious after the continuous contribution of SSS premiums: how much pension will they receive once they enter their retirement age and are eligible to receive their pension?

According to Susie G. Bugante, vice president for public affairs and special events of the SSS in her January 21, 2017 column at Business Mirror, a rough computation of expected retirement pension can be based on Section 12 of the SSS Act of 1997.

“SEC. 12. Monthly Pension. ‐ (a) The monthly pension shall be the highest of the following amounts:

“(3) One thousand pesos (P1,000.00): Provided, That the monthly pension shall in no case be paid for an aggregate amount of less than sixty (60) months.
“(b) Notwithstanding the preceding paragraph, the minimum pension shall be One thousand two hundred pesos (P1,200.00) for members with at least ten (10) credited years of service and Two thousand four hundred pesos (P2,400.00) for those with twenty (20) credited years of service.”

There are three formulas in which SSS pension can be computed, and while each formula may yield different results, the highest amount among the three shall be considered as the SSS pension.

To illustrate the formulas, two SSS members made contrasting contributions amounts over 25 years. One, say, Pedro, has monthly salary credit of P16,000, the maximum salary level for SSS contribution, contributing P1,760 every month.

Another SSS member, said Juan, has P1,000, the lowest salary level for SSS contribution and contributes P110 per month.

In the case of Pedro,

Among the three, Formula 1 has the highest yield and will become Pedro’s monthly pension.

In the case of Juan,

Among the three, Formula 3 has the highest yield and will become Juan’s monthly pension. 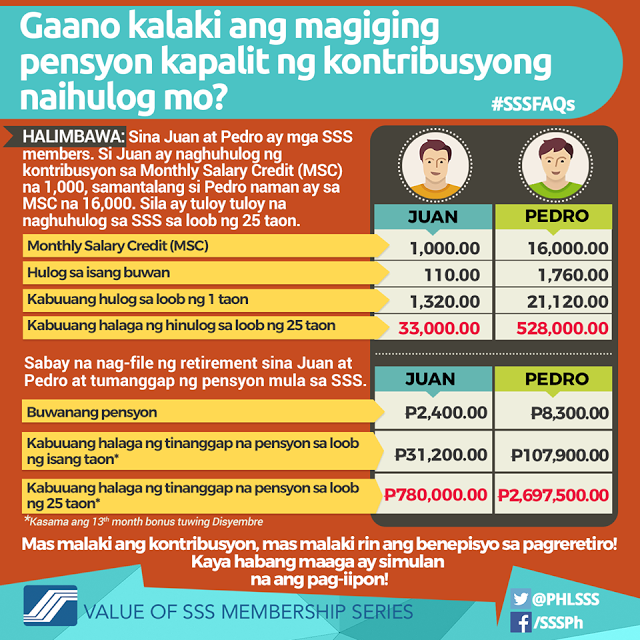 Should any of them pass away and are survived by legal spouses, their monthly pensions will transfer to their spouses as primary beneficiaries.