OFW Relationships: Why Married OFWs Fall in Love With Other People

7 Things You Need to Know About OFW Medical Exams

Flat sharing, otherwise known as boarding house/room sharing in the Philippines, is not a new thing for Filipinos. So when I first arrived in the UAE in 2004, I was not surprised to adapt to such an arrangement as I temporarily stayed at my cousin’s rented room inside a flat located in Bur Dubai.

I was supposed to stay there for three months as my cousin sought permission from his Filipina landlady, who leased the whole one-bedroom flat. But in a few days, I have realized that the house accommodated more people as I met them in the kitchen, an area that doubles as a living room where renters eat and talked. My new-found friends asked if I am looking for work as they also opened up part of their life at work in Dubai, the economic hub in the Middle East where at the time moving cranes outnumber the birds surfacing in the skyline.

I counted all the people inside the flat: 15, including me, all fitting in five rooms. Why four when it is just a one-bedroom flat? Well, your guess is good as mine. The Filipina landlord has become greedy and wanted more profit, so she turned the main bedroom into two partition rooms, and the hallway was partitioned into two rooms plus the balcony was enclosed with canvas (fabric material for tents). Each room houses at least three people. Doing the basic math, five rooms at three occupants each means 15 people squeezed into the dwelling, and queuing for one toilet/bathroom can be a challenge. Also, count that kitchen transformed into the sala/living room.

I asked myself how these people squeezed them into partition rooms filled with double bunk beds and wall separation made of timber wall and curtains. If they have forgotten the concept of privacy, yes, a couple is sharing the room with another couple or another singleton. Well, the main reason for allowing themselves to live such conditions is that it’s probably the only type of place that fits their budget. 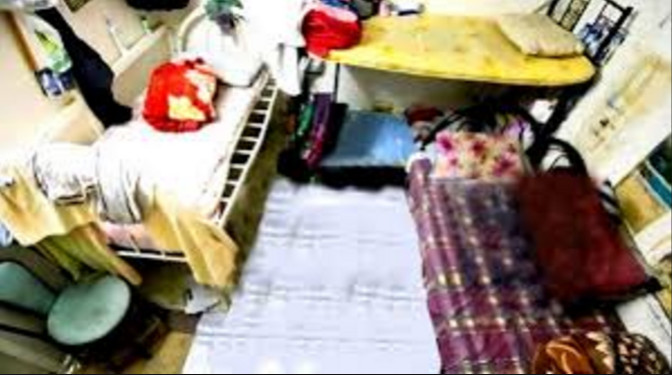 While, until recently, UAE is well-known for 100% tax-free wages, the majority of the Filipinos working in hospitality and sales receive a lower salary than those working in hospitals, engineering, and other sectors. With an average monthly wage of 3,000 Dirhams (P37,000), they will not afford a studio for themselves that will cost 2,000 Dirhams per month (P26,400), so they will opt to stay in shared accommodation that costs only 500-700 Dirhams (P6,000 to 8,000) and save money for their families back home.

It is ironic that the landlady even asked me when I will leave the room of my cousin since I already got a job in my second month staying with him. Of course, I am moving out as I cannot stomach that kind of accommodation.

But in my mind, why is she in a hurry? Does she have another person waiting in line, or she is just mad at me being vocal and complaining about her regulations managing the flat, including the food she serves to all tenants? She wants more income, so she does catering for lunch and dinner meal packages for tenants who don’t have time to cook at 15 dirhams (P185) per meal, so it is P370 per day or P11,100 monthly. And since you need to have snacks, you need to pay it monthly.

Well, it was welcoming for people like me who don’t know kitchen chores. Still, since I don’t go home for lunch and I come back late — I have a part-time job as editor of a Filipino Magazine at that time. After office hours, I’ll change clothes and run to publication office — I was expecting to find my food on the table or inside the fridge to munch later for my midnight snack. But it is nowhere and only to find out then that my diet was sold to other people in other flats of the same building.

When I raised the issue, I knew she was mad at me, so I was looking for my place before she even asked me to move out. But what shocked me was to find out that we are not just three people inside the room of my cousin where we stay in the double bunk bed, while his colleague stays in the single bed but partitioned with full curtain. As I have part-time work, I don’t stay in the flat most of the time as I go for work at 6 am and back home at midnight. During weekends I go out with some friends or visit my sister in another Emirates.

So I don’t know what is going on in our room. I rarely see and talk to my cousin and his colleague since they have also work shifts. There are times that I feel somebody was inside the room when I knew, and I am fully aware that my cousin and his colleague are at work. I am also wondering who was cooking in the rice cooker inside our room and find newly-prepared food. I just ignored it and thought that maybe the landlady has a key to our office.

A few days before I moved out, I finally unveiled the mystery behind it. That day after my usual office timing, I stayed in the room as I have finished my editorial deadline. Then I heard footsteps going out of the room. A woman, coming from the partition of my cousin’s colleague. She was young for the older guy, so I assumed she was a girlfriend, and she moved out of our room discreetly as if she knows that I am there, and she has to go out before I catch her. I asked my cousin about it, and he was clueless. All he knew that he is a happily married guy in the Philippines.

Then after confirming from other boarders, I fully understood why the landlady wanted me to move out. She knew the woman, and she allowed her to enter the premises as she was initially staying there. However, when she was unable to pay as she was still jobless and on a visit visa, she offered herself to cook for my cousin’s colleague, who was the original tenant of our room. They became a couple, at least in Dubai, and without the knowledge of his wife back home.

Temptations and developing secret relationships have become quite common in a shared place, so I was not surprised that the landlady who has a family in the Philippines is living in the flat adjacent to ours with her ‘temporary husband’ and kids in UAE. When I finally moved out into my small studio, my colleagues find it luxury, but I call it privacy. I don’t have issues with sharing rooms, and I fully accept their valid reasons, but I was not raised to be with strangers in a place.

I have attitude, moods, and a loud snore that will cause trouble and maybe fistfights even. Nowadays, flat-sharing has been upgraded as people have now choices who they want to be with. Sometimes officemates rent a flat and share it. Dull sharing advertisements are now particulars with posted headlines such as For All Filipino Only or All Filipino Males Only and All Filipina Girls Only.

Besides, it is not allowed to have a room sharing in UAE for mixed genders if you are not a married couple, but still, some Filipinos defy the rule with males and females living together under the guise as relatives. But Municipality Inspectors (Baladiya) have also been doing their job, forcing hundreds of Pinoys homeless as they have been forced to move out of residential villas because of sharing the rooms with people who are not their relatives.

So next time, before you even consider moving to a shared flat, consider weighing your choices as you will have to open up your life, share it with your roommates, forced to accept and trust total strangers and give in to temptations.

Of course, if you can afford a studio or a less crowded room, better to spend a few hundreds of dirhams to avoid the hassles of being in overcrowded accommodation. Live your life to breathe and enjoy a little privacy and peace than squeezing yourself into a canned room to pamper your family back home. Save enough money for yourself and indulge in your life if you still have time and chance.

Otherwise, you end up being frustrated, remitting your full hard-earned money to your family with the funds ending up being spent on unnecessary things while you sacrifice everything to save cash.

About the Author
Ekim Toperi, is a Global Nomad, a 10-year Dubai veteran, who has traveled to the Mediterranean and Russian Territory for a cultural and winter experiment. A civil engineer and a passionate Artist & Writer. A New Hero Awardee of BFFI, a Word-With-Friends Addict, a tennis enthusiast, and a freedom lover.

Can I Send My LCD TV To Philippines Via Balikbayan Box?