5 Reasons Why OEC Should Be Abolished

From Dishwasher to Successful Entrepreneur

8 How OFWs Can Beat Homesickness Abroad

Overseas Employment Certificate (OEC) is a piece of document that overseas Filipino workers (OFWs) need to present to the Immigration Department upon leaving the Philippines for work abroad.

The main purpose of OEC is to provide proof that as OFWs, they are exempted from paying travel taxes and terminal fees. Once they present this document, along with their passports, OFWs are cleared to bypass the collecting agents located inside the terminal building across international airports in the Philippines.

OECs can be filed at consulates and embassies of the Philippines located abroad, as well as POEA offices in the Philippines. While the cost may be minimal, many OFWs argue that it’s not just about the money and the time spent, but more on its practical use.

Why Overseas Employment Certificate (OEC) requirements must be abolished

The title may be a bit too much if the cost per copy of OEC is an affordable P100. But to ordinary OFWs who haggle for better exchange rates so they can send more money back home, this amount (or equivalent foreign equivalent), is too much. Not to mention the cost of transportation, food and effort just to fall in line and get this document.

Obtaining OEC or exit pass can be long especially on places where concentration of OFWs is high. Therefore it can be a considerable amount of time to get this form sorted out. And since time is also money, don’t we think it’s sometimes more practical not to get OEC to avoid costs and risk to physical health and inconvenience at work?

Paying a fee for a document that exempts one from paying a fee sounds redundant and impractical. If you add the hourly rate at work queuing, paying for transport or even taking a leave from work, may even be higher than the airport terminal fees and travel taxes combined. But OFWs are forced to comply, because failure to present an OEC to an immigration officer could get them at risk of offloading.

There are other ways we can prove ourselves as OFWs

If the main reason for OEC is to prove that Filipinos are certified working abroad, OEC is not the only document that will solve this issue. OFWs can show their job contract certified as valid by the embassy, visa on their passports or IDs/residence permits of their country of employment. OEC just complicates the matter and has become a big nuisance to many Filipinos abroad. 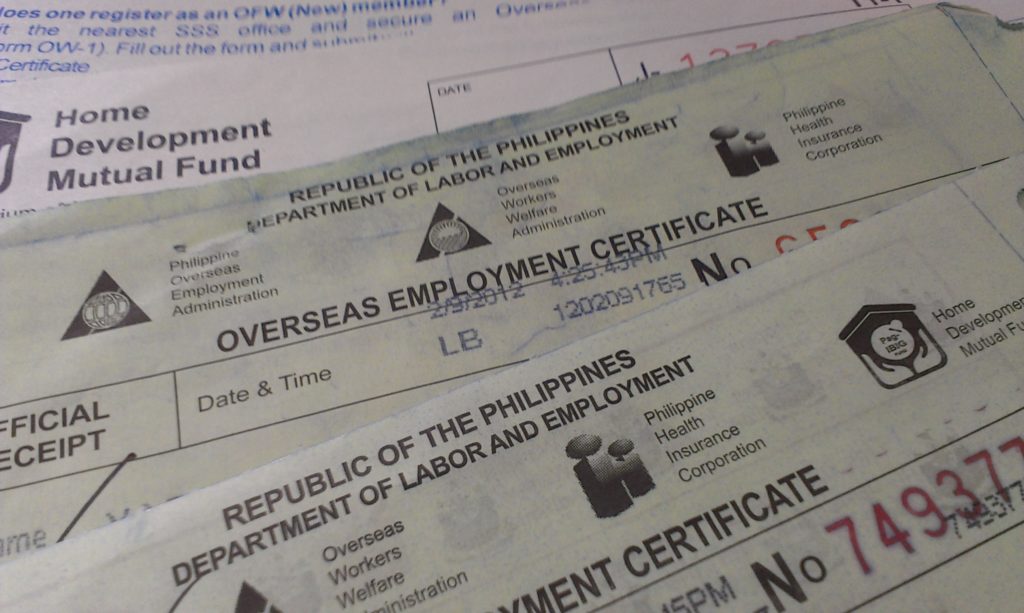 It adds workload to consular staff

Staff who are supposed to attend to more important tasks — assist distressed OFWs, follow up labor violations, and others — are forced to sit and issue these OECs, thereby making them unavailable to assist Filipinos who seek other forms of help.

We have been notified previously that OEC will be abolished. But until now, or at least in 2014 (see Twitter feed below), OEC is here to stay.

POEA administrator Hans Leo Cacdac confirms that they are working on a system that will store OFW information in a database. Expected to be ready by 2014, it will eliminate the need for OECs.

@pinoy_ofw We are working on a system where an ofw in our database with updated owwa etc won’t need an oec. Give us till 1st half of 2014.

@mestreller @pinoy_ofw The OEC stands as proof that one is a documented OFW. Heto ho muna ang sistema natin and we ask for your patience.