Marry an OFW: 7 Reasons Why You Should

How to Apply for Voluntary Repatriation in Kuwait

Most Common Items Found in an OFW Balikbayan Box

Overseas Filipino workers have always been playing the role of Santa Claus, sending money, balikbayan boxes, and other gifts to families in the Philippines. This role is extended beyond what Santa Claus would do because OFWs perform these tasks year-round.

However, OFWs also have a list of gifts they would like to receive. Even though this list didn’t come from a survey or any empirical study, OFW voices seem to indicate the validity of items they’d like to receive, gift wrapped or not.

The value of wages of overseas Filipino workers has always been dependent on currency exchange fluctuations. The appreciation of the US dollar — and other currencies — have significantly reduced the value of their remittances. That is why, despite numerous pieces of advice on efficient money remittance, OFWs have always appealed to better rates even if it’s more complicated than the wrong notion that the Philippine government dictates the foreign exchange rate.

This gift is certainly not the most difficult to grant. That’s because we already outlined why the overseas employment certificate (OEC) is impractical and wastes OFW productivity, money, and, more importantly, quality time. We’re hopeful that the POEA, which oversees the implementation of OEC, will finally abolish this system before July 2014, as promised.

Many OFWs decry the apparent abuse of underaged and underqualified Filipinos trafficked overseas for prostitution and other forms of human exploitation. However, tourists and overseas contract workers who see themselves as legitimate are arbitrarily denied the right to travel for a variety of reasons. The possession of valid documents (passport, return air tickets, job contracts), and tons of proof that they deserve to travel does not seem to guarantee access to boarding gates. This is perceived as abuse by immigration authorities, as a flurry of malpractice complaints. We’ve done some advising, but these could be rendered useless if violence persists. 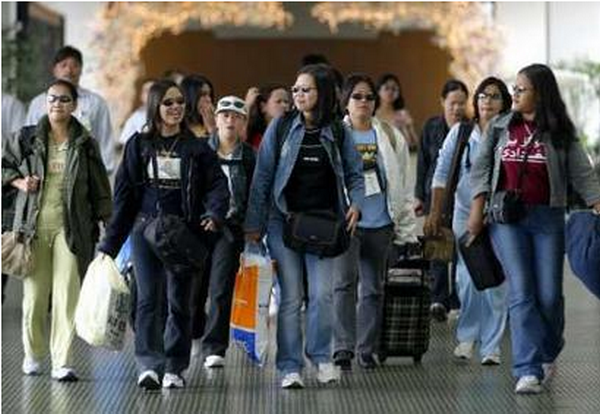 Implement a law against age discrimination.

OFWs turn to jobs abroad partly because, among others, age discrimination that’s persisting in the Philippine job market remains unchecked and unregulated. People who are qualified but lack connections or are a bit over the age limit get bypassed in favor of the well-connected and glut of young inexperienced jobseekers.

Expand service of Pag-IBIG, SSS, and Philhealth for OFWs and families.

OFWs acknowledge life abroad is mostly temporary and try to save for the future not necessarily as an investment, but as a fund for retirement years. But even as unfavorable news that features unjustified bonuses for those who are mere caretakers of our wealth and hikes in premium contribution, we need to set aside savings as a plan for the future. We don’t mind if we reward those who keep and grow our savings, as long as we get what we deserve, and ensure that stable fund is available for future generations of pension receivers.

As the giant sign plastered at large construction sites goes, “Safety First,” OFWs clamor for a safe working environment. This means protection from abuse (bad treatment from employers, punishment to illegal recruiters, and proper handling of overseas Filipinos in distress such as legal advice and repatriation assistance. Even when arriving back home, protection from opportunistic individuals should also be enforced.

The government wishes to extend help in whatever way it can, and now we’ve presented several Christmas wishes OFWS wants to receive. We are hoping that assigned agencies take notice and find ways to grant them. Having one of the above wishes granted brings big joy to OFWs as they continue to carry plenty of problems as they play their role as providers for the family and the country.

Why Many Filipinos Want to Work Abroad

Peniless OFW: 4 Reasons Why Some OFWs Return Home Without Savings