1. Toronto (2.732 million)
Toronto is Canada’s largest city and fifth most populous city in North America.  The city is one of the most diverse in the world, with 49% of its residents born outside of Canada. 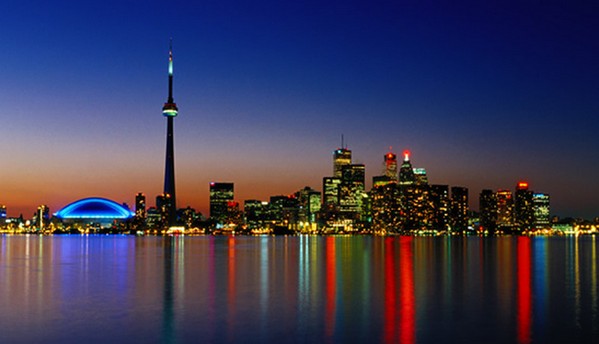 2. Ottawa (934,340)
Ottawa is the capital city of Canada and its fourth largest city.  Ottawa is ranked as the second highest quality of living of any large city in the Americas, and 14th highest in the world.

3. Mississauga (721,600)
Initially planned as a suburb of Toronto, Mississauga grow to become a distinct city in itself. Canada’s busiest airport is found in the city and it’s also home to large corporate headquarters in Canada for companies such as Walmart, Target, Microsoft and General Electric.

4. Brampton (593,635)
Brampton’s name was taken from the town of Brampton in Cumbria, England. Currently, it is home to major economic sectors such as manufacturing, retail, logistics, information and communication technologies, food and beverage, life sciences and business services.

5. Hamilton (536,915)
Hamilton has become the centre of a densely populated and industrialized region at the west end of Lake Ontario known as the Golden Horseshoe. It is also a famous film location and earn nicknames The Hammer, Steeltown and Ambitious City.

6. London (383,825)
Located halfway between Toronto, Ontario and Detroit, Michigan, London is Canada’s 15th largest municipality. It also earn the reputation as center of international education being home to Fanshawe College and the University of Western Ontario.

7. Markham (328,965)
Markham is the fourth largest community within the Greater Toronto Area after Toronto, Mississauga and Brampton. Markham changed its status from town to city on July 1, 2012.

8. Vaughan (306,230)
Vaughan was the fastest-growing municipality in Canada between 1996–2006, achieving a population growth rate of 80.2% according to Statistics Canada having nearly doubled in population since 1991.

10. Kitchener (204,608)
Windsor is the southernmost city in Canada and is located in Southwestern Ontario at the western end of the heavily populated Quebec City–Windsor Corridor. Windsor is known as “The City of Roses” and residents are known as Windsorites. It is the only city in Canada that looks north to the United States.