An Expat’s Life in Oman: An Experience Worth Anything

While the world is in the midst of a battle against an invisible enemy, there’s an outpouring of gratitude towards frontline workers who risk their lives daily.

Health workers, delivery personnel, and sanitation workers have been the recipients of both words of thanks and supplies, such as personal protective equipment and food. It has indeed brought out generosity and goodwill among citizens who owe their well-being and health to this new breed of heroes.

Overseas Filipino workers are also deemed heroes long before the coronavirus health crisis erupted. But during this time of COVID-19, many of them have been unable to perform their duties due to strict quarantine procedures, stoppage in transport, and other measures aimed at reducing the spread of the virus.

Domestic workers often have extended roles beyond what’s written in their employment contracts. When they’re interviewed for the job, they’re asked if they’re okay to look after small children. Looking after doesn’t only refer to sending them to school or changing their clothes. It might also involve tutorials and assisting with homework. As classroom sessions are canceled and children are told to stay home, learning doesn’t stop, and kids might be asked to remain online for lessons and submit homework.

Now, instead of just sending the child to school and doing housework while everyone else is away, the domestic helper could be more involved in a child’s schoolwork. This change leaves her with less time to do her usual routine of laundry, cleaning, grocery, and cooking.

Employers are working from home

As employers start working from home, domestic workers find themselves in a more difficult position of maintaining their pace of work under a more watchful eye of their bosses. Smaller apartments make it more difficult for them to perform their tasks efficiently. They can still perform their duties with employers around, but domestic workers expect more interruptions along the way. And even if there are no special requests, one can easily compare the situation to doing your tasks with your manager closely monitoring your actions.

Helpers are required to live in employers’ homes

Hong Kong laws require domestic workers to live in the homes of employers who signed their employment contracts. That means they are more prone to abuse. For example, being at home all the time means domestic workers can easily get disrupted during their rest or personal time by an unreasonable request by an employer to cook a meal or tend to a sick child. Not only that, but many helpers have also complained about inadequate facilities to rest or space for privacy inside their employers’ tiny apartments.

A lot of employers of foreign domestic helpers in Hong Kong spend their holidays abroad. Since the coronavirus issue broke out, there were reports on domestic helpers getting infected by their employers who have arrived from a foreign trip. Without any other option but to stay in their employers’ homes, domestic workers are often at the mercy of the virus, which might have penetrated already within domestic premises.

Employers disallow helpers to go out

For fear of being in contact with another infected person outside, employers sometimes forbid their helpers to spend their days off outside. In normal circumstances, this is a breach of labor laws, and the employer could be subject to a complaint. But under this extraordinary situation, helpers themselves find their employer’s homes as a safer refuge, even if it means forgoing the day they look forward to meeting friends, sending money to family, or serving their church communities.

Some helpers are accorded their rights, often staying at their rooms undisturbed during days off. Others are asked to work but compensated accordingly. Still, others have to work seven days a week without proper compensation at all.

Other employers bar their helpers from going out on their days off for fear they could bring in germs and infect the household. Yet, they’re the same bosses who command their helpers to go for groceries or walk the dog out six days a week. 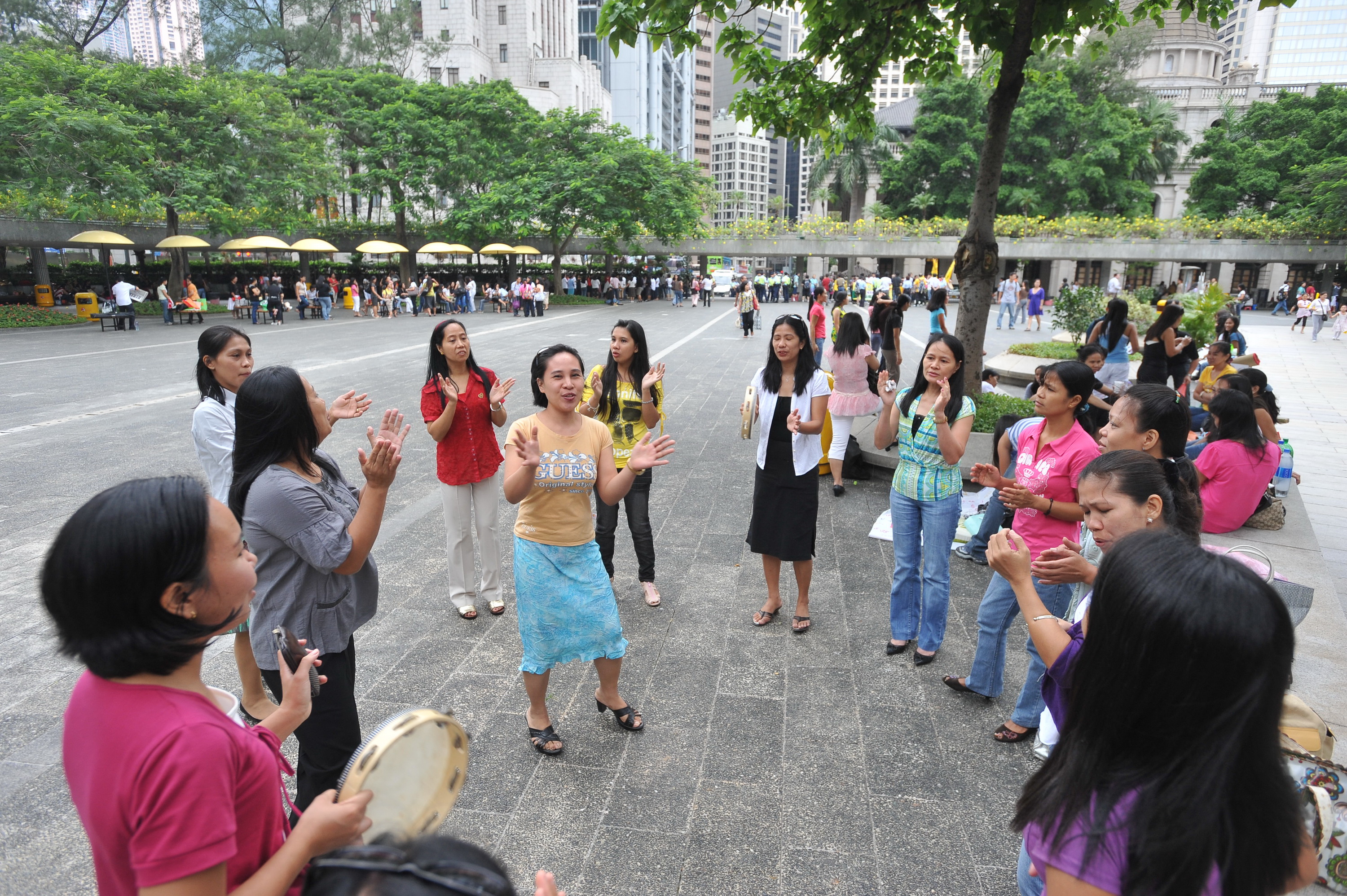 Some employers have become too preoccupied with cleanliness that the only order they bark to their helper is to clean the house extensively. Some helpers claim that their employers even order everyone in the house to wear masks and gloves in the house, order the helper to sterilize the house several times a day, and wash her hands every 30 minutes. This is fine for helpers, but if it takes too much of their time to do other tasks, they’ll end up staying up late to look after unfinished business in the house.

Some helpers could only muster a joke that they’ll die of Clorox exposure than the virus itself.

Many employers are considerate enough even to walk that thin line that defines what’s allowed and prohibited by law. For example, if an employer arrived from overseas travel, they are required to undergo a quarantine and be confined in their homes for a couple of weeks.

To better enforce the order, employers secure a separate accommodation for a helper just to make sure she doesn’t get infected in case the employer was found to be a virus carrier. However, such arrangement — helpers staying out of the employer’s residence — is a breach of labor laws, and both helper and employer could be prosecuted for such violation.

So helpers face this million-dollar question: should I follow the law and risk infection or break the law to stay safe?

Helpers are often resilient and manage to get out of frustration and depression quite well. They usually don’t worry about themselves. But they worry about their children and parents in the Philippines, which is also currently under enhanced community quarantine.

They ask the question, “what if I get infected and die, who will look after my family?” or “does my family have enough to eat or received help from the government?” Traveling from Hong Kong to the Philippines doesn’t take a long time. Still, without airlines operating the usual routes, helpers can’t directly book a ticket and visit families to reassure their wandering minds at ease.

Unable to meet friends in person and express their worries, many of the helpers could be battling mental issues such as depression and anxiety.

Hong Kong entered into an economic recession late last year. This resulted in widespread levels of unemployment, especially in areas that are directly affected by the virus, such as tourism, dining, and transportation. Some of these people may have employed domestic workers to look after their homes and children while they are at work. Now that they have lost their jobs, they have lost their means to pay their helpers while they gained time to do the tasks their helpers were commissioned to do.

As a result, many domestic helpers might find themselves losing their jobs as well.

The Hong Kong government has offered to compensate companies in Hong Kong to keep people in their jobs, and cash assistance to each citizen and permanent resident to endure this crisis. But sadly, such help does not extend to domestic workers.

Even the assistance offered by the Philippine government may take a while to reach its intended recipients.

Filipino domestic helpers have endured the problem before coronavirus. In 2019, anti-government protests disrupted the usual way of life. Domestic workers spend their days off as certain public places have been sites of violent clashes between police and protesters and have been restricted for public use. Warnings have also been issued to ensure the safety of the public.

And then came the COVID-19 pandemic, which has kept Hong Kong under tight restrictions even as other economies have started to co-exist with the virus.

Domestic helpers have endured and suffered a lot amid changes in the way they work and live in Hong Kong. The least we could probably do is to acknowledge their roles as unsung heroes and express gratitude for their dedication to work despite the difficulties, humiliation, and challenges they face.

Why Some HK Domestic Helpers Hate The Typhoon Season